The Rhodesian Ridgeback is a dog breed developed in southern Africa. Its European forebears can be traced to the early pioneers of the Cape Colony of southern Africa, who crossed their dogs with the semi-domesticated ridged hunting dogs of the local Khoikhoi people. Also known as the Lion Dog – because of its ability to hold a lion at bay while awaiting the hunters to make the kill. 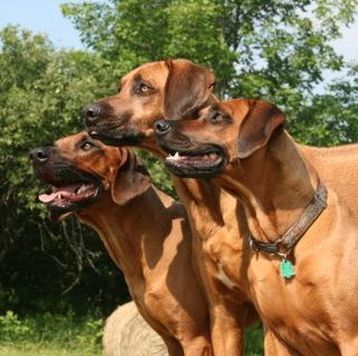 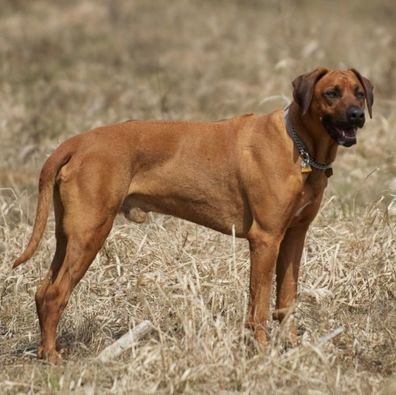 The Khoikhoi people who occupied the Cape Peninsula when the Dutch began trading with the area during the mid 17th century, had a hunting dog which was noted for its ferocity when acting as a guard dog. This dog measured approximately 18 inches (46 cm) at the withers, with a lean but muscular frame, however the most distinctive feature was the length of hair growing in the reverse direction along its back. Within 53 years of the Dutch settlement, the Europeans were using these local dogs themselves.

By the 1860s, European settlers had brought a variety of dog breeds to this area of Africa, including Great Danes, Bloodhounds, Greyhounds, and terriers. These breeds were bred with the indigenous African dogs, including the dog of the Khoikhoi people, which resulted in the Boer hunting dogs, a forerunner to the modern Rhodesian Ridgeback.

Reverend Charles Helm travelled to the Hope Fountain Mission in Southern Rhodesia in the 1870s, taking two ridged dogs with him. It was there that Cornelius van Rooyen, a big–game hunter, saw them and decided to breed his own dogs with them to incorporate their guarding abilities. The offspring were dogs with red coats and ridges. They became the foundation stock of a kennel which developed dogs over the next thirty five years with the ability to bay lions, that is, to hold them at bay until the hunter makes the kill. The dogs were used to hunt not only lions but also other game, including wild pigs and baboons. The first breed standard was written by Mr F.R. Barnes in Bulawayo, Rhodesia in 1922. Based on that of the Dalmatian, it was approved in 1926 by the South African Kennel Union.

The breed is currently recognized by the several national kennel clubs around the world, including the Canadian Kennel Club. It is part of the Hound Group. 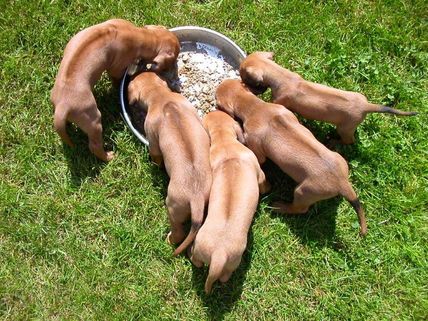 The Rhodesian Ridgeback’s distinguishing feature is the ridge of hair running along its back in the opposite direction from the rest of its coat. It is believed to originate from the dog used by the original African dog population which had a similar ridge. The ridge consists of a fan-like area formed by two whorls of hair (called “crowns”) and tapers from immediately behind the shoulders down to the level of the hips. The ridge is usually about 2 inches (5 cm) in width at its widest point.

A little white on the chest and toes is permissable.  Ridgebacks sometimes have a dark mask. The dog’s nose should be black or brown (liver) in keeping with the color of the dog. No other colored nose is permissible. The brown nose is a recessive gene. It is not as common as a black nose; some breeders believe the inclusion of brown noses in a breeding program is necessary for maintaining the vibrancy of the coat. The eyes should be round and should reflect the dog’s color: dark eyes with a black nose, amber eyes with a brown (liver) nose. Ridgebacks have a strong, smooth tail, which is usually carried in a gentle curve backwards.

The Rhodesian Ridgeback’s ridge is actually a ridge of hair on the dog’s back growing in the opposite direction to the rest of the coat, and is a peculiarity  of this breed.  The shape of the ridge is determined at birth and does not alter.   A correct ridge should contain two identical crowns opposite each other.
It should be noted that a Rhodesian Ridgeback may sometimes be born without a ridge.   Although it is not possible to show these dogs in conformation without a ridge, a ridgeless Ridgeback is an otherwise healthy dog who can participate in any other competitive activity and be a wonderful pet.

Rhodesian Ridgebacks are loyal, intelligent, and somewhat aloof to strangers. This is not to be confused with aggression; a Ridgeback of proper temperament will be more inclined to ignore, rather than challenge, a stranger. This breed requires positive, reward-based training, good socialization and consistency; it is often not the best choice for inexperienced dog owners. Ridgebacks are strong-willed, intelligent, and many seem to have a penchant for mischief, though loving. They are protective of and affectionate with their owners and families.  Like any dog, they can become aggressive when they are not socialized properly. 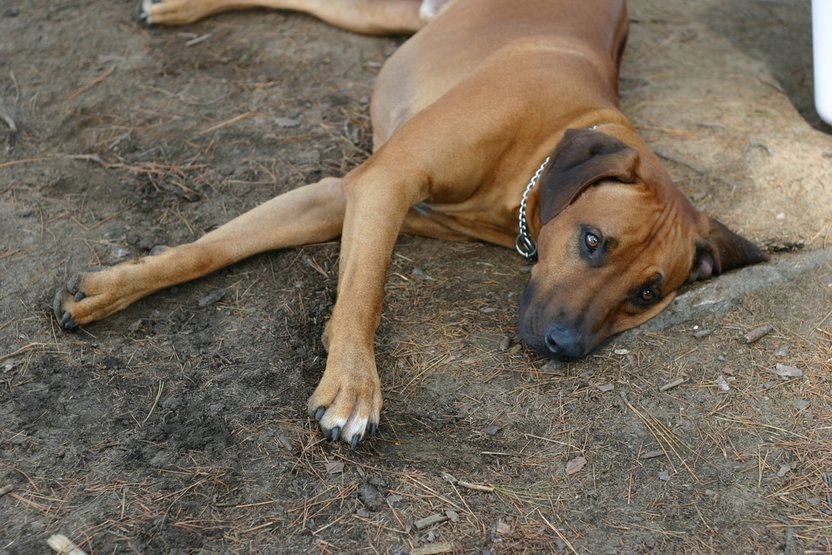 Despite their athletic, sometimes imposing, exterior, the Ridgeback has a sensitive side. Francis R. Barnes, who wrote the first standard in 1922, acknowledged that “rough treatment … should never be administered to these dogs, especially when they are young. They go to pieces with handling of that kind.” The Ridgeback accepts correction as long as it is fair and justified, and as long as it comes from someone he knows and trusts.

For further elaboration, we recommend the book, “A Guide to the Rhodesian Ridgback in Canada” by Jo Dunn and George Whitney (ISBN 978-0-9880595-0-4. Published July 2012.)  This book can be purchased through the Rhodesian Ridgeback Club of Eastern Canada.